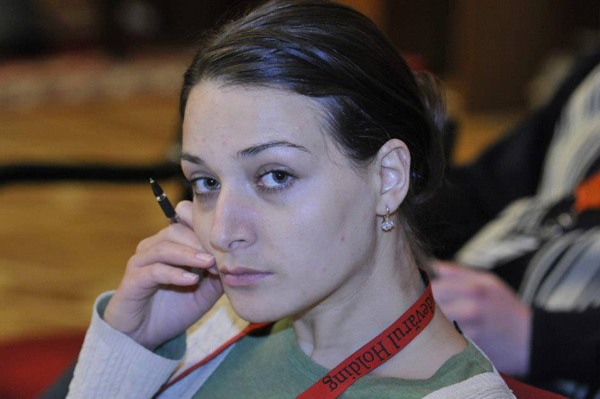 ”The Chisinau School of Advanced Journalism (CSAJ) taught me to do my job properly. After graduation, when I write, I think: What will my CSAJ trainers say about this article?”

Interview with Anastasia Nani, reporter for the newspaper Adevărul, Moldova.

Question: I think each student has his/her story of how they got to the School of Advanced Journalism (CSAJ). What is your story? Answer: It was rather an advice given by a good friend, graduate of the first class. My friend praised so much the School and its trainers, that I decided it would be a pity not to try. That year, 2008, I graduated the Department of Journalism and Communication. University studies, in my view, meant a lot of theory and very little practice. Journalism, however, is something you learn in the field and in the newsroom. So my expectations about CSAJ were met. During several months I “run around” in the field, probably, as much as I did it during four years of university studies.

Question: Before enrolling to CSAJ you worked as a journalist and you did a good job. What determined you apply to CSAJ, supposing that you were, if I may say so, an already trained journalist? As well, what new things in terms of science, practice and life the School offered you?

Answer: During the studies, I was a reporter for Ziarul de Gardă. I will not exaggerate if I say that this newspaper was my first school in journalism. Today, if I open the newspaper’s archives, I realize that Alina Radu and Aneta Grosu had a lot of patience with my first stories. At the CSAJ I had the opportunity to study both TV and Radio journalism, but also online journalism – a very important field, which in 2008-2009 was not as much developed as now.

Question: Did you regret that the School “stole” almost a year of your life?

Answer: How could I have regrets when the professions in their fields taught us what they were best at? Many local and foreign trainers became for me and my colleagues good examples to follow. Here are just a few names – Alina Radu, Vasile Botnaru, Vitalie Dogaru, Koen Geurts and others.

Question: People say that the Journalism faculties in Moldova focus mainly on theory, whereas the CSAJ primarily concentrates on practice. What is your view on journalism and journalists work?

Answer: This kind of work is to be done only in the field and in the newsroom. Unfortunately, the faculty I completed was endowed only with one radio and TV studio, with old equipment and the layout training was conducted on the blackboard. Moreover, there was too much focus on theory. No wonder that the lecturers were joking “When you start working in a newsroom, you will have to forget everything you learned during the four study years”. Maybe that is the reason why many journalism students after graduation don’t know how to write correctly a news story. At least that is how it was five years ago. Now I can count on fingers graduates of my class who work in press, TV or radio. I was saved because, after the first study year, I had the courage to knock at the Ziarul de Gardă door and say “I want to write!”.

Question: In which way the knowledge and skills gained during the studies at the Chisinau School of Advanced Journalism help you now?

Answer: First of all, they help me to do my work well or at least wish that. Very often, after I graduated the School, while investigating or writing, I thought “What will my CSAJ trainers say about this article? That I didn’t bring to the end the subject and that I ignored their advice?” I don’t deny that even now I sometimes think like that. I tried to take from them everything the best they had to offer. So, nearly four years after the graduation, I wish to think that I do my job as professionally as many of them do it. Answer: If I had knocked at the ProTV door, I would have probably worked on TV, instead I went to Ziarul de Gardă where I tried learning how to guard the sack of public money and also to write about the multitude of rights that are violated. It is not easy to practice investigative journalism in Moldova, where nearly all institutions were divided according to political criteria and where, in many cases, something pops up only if the leaders of the governing political parties haven’t managed to share something among them. For instance, let’s recall the hunting at the Pădurea Domnească. That is the proof that we don’t have so many reporters specialized on this segment. Ultimately, it is easier to fill-up the online platforms with copy-pastes, instead of doing high quality reporting.

Question: In the field of journalism, the angle of approach plays a key role. You always try something new, something that other cases, newspapers and journalists don’t tackle. How do you manage to find the novelty for your articles?

Answer: A training organized by Reuters tackled the issue of clichés and how we may lose our readers if we do not avoid them. I am so much afraid of clichés, that my colleagues think that I have scraped the barrel. It is a difficult exercise to write in a different manner about the events of 7 April 2009 after five years. It is even harder to write about the nuclear accident at Chernobyl that occurred 28 years ago.

Question: How critical, or better said, auto critical a journalist has to be? And what are the front line qualities a journalist should have?

Answer: Correctness towards sources, accuracy, and rapidity in documentation and writing. Apart from that, it wouldn’t hurt to be auto critical, this could mobilize the person to improve.

Question: At a certain point you tried flirting with TV, however you returned to print press. What was the reason of this “premature divorce”?

Answer: TV is very attractive, especially when you arrive at seeing yourself on the screen. For me that was not enough. What I liked about the print press is the need to do more analysis. If we had in Moldova such a talk-show as “Romania, te iubesc” (English translation: “Romania, I love you”) produced by Pro TV, probably many reporters in love of print press, would be tempted to also try TV.

Question: From you point of view, what are the biggest challenges in journalist’s work?

Answer: In journalism each day is a challenge. It is a challenge to find a good subject and bind it together, to be accurate with the sources and the readers, to know when it is time for self-censorship and when you should fight with your boss to cover an issue. As well, it is very important not to allow being manipulated, but neither permit yourself to manipulate the audience. Otherwise you risk to be billed.

Question: Have you ever felt under threat (as there were many cases of attack/threats on journalists), as the work of a journalist (especially investigative one) implying searching, digging and not leaving in peace those who deserve it? Answer: Finally, it is a risk we assume. Journalists are threatened every day, sometimes they are tried in courts and are demanded to pay enormous amounts of money. Similar to my colleagues, I have encountered different situations. For instance, I won a legal case against four policemen. I may not bypass April 2009. I can still recall 8 April 2009. We were at Ziarul de Gardă editorial office, preparing the newspaper for printing. Alina Radu saw through the window how several young people were chained and stuck into the police cars. Together with Nicolae Cuşchevici, Tatiana Eţco and Alina Radu we went down to see what was going on. I believe we were a step from being detained.

Question: Have you ever thought of leaving journalism and focus on something else?

Answer: Of course, I have thought about that. There are many media institutions now, but how many of them allow you to do your job in a free and honest way? Probably those that are not related to any political parties may be count on a hand’s fingers. At a certain point I thought of moving to the other side of the barricade in “communications”. Maybe one day I will be courageous enough to try that out.

Question: Recently you “took up a new position” that of a young mother… Is it possible to combine journalism, especially investigative one, with private life, family, children?

Answer: I will be honest. For the moment it is not easy to be a parent and journalist. From time to time I try writing, but not so much. Amid diaper changing and poems rehearsal, I try documenting some things.

Question: A final question, what would you advise the current students and young journalists of the School?

Answer: We have many newsrooms and many journalists. However there are not so many smart reporters. Go to the newsrooms and learn the journalist’s craft from the good people.