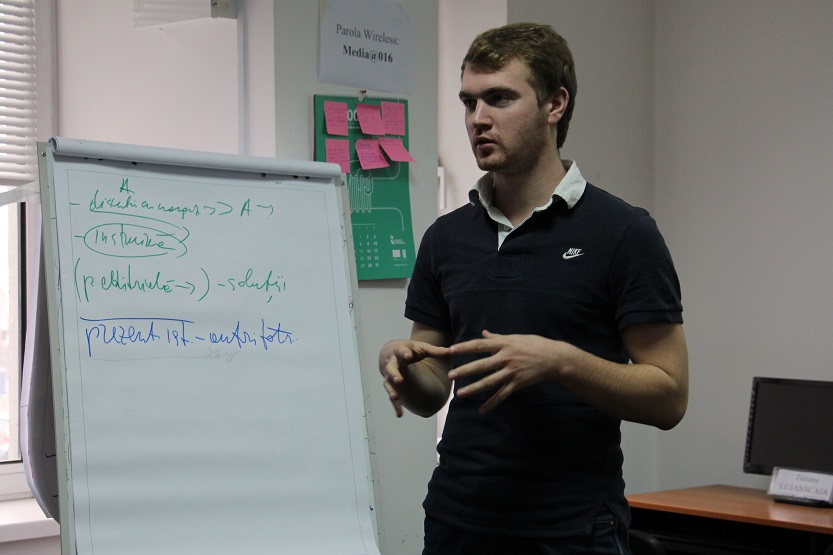 ”Journalism does not tolerate laziness and fear”

He is a passionate football fan, but he had been interested in journalism since elementary school, when he used to read the “Sport-Courier” newspaper from cover to cover and dream of someday writing interesting and exciting reports about football matches. Over time, however, this dream was lost among many other thoughts, desires and aspirations. Therefore, after high school he continued his studies at the Agronomy Faculty of Comrat State University.

Everything changed after he participated in training for civil society representatives due to his collaboration, since the university, with a public association in the Gagauz autonomy. At that training he met several journalists and realized that the chance to fulfill his childhood dream had not yet been lost, he only needed some special studies. Soon after that, he entered the School of Advanced Journalism, where, he says, he was able to learn the profession from the country’s best journalists. He is convinced that all knowledge that he obtained in the 10 months of training will help him become a true professional in this field. We are talking about Petru Garciu, who graduated the School of Advanced Journalism in 2016 and is currently a reporter with the www.gagauzmedia.md news portal in Comrat.

Dreams come true. If you so desire...

“In 2015 I graduated from the Agronomy Faculty of the Comrat State University. Simultaneously, from my time at the university, I was working as a press officer in the “PILIGRIM-DEMO” NGO. Despite having no experience in the field, it was there that I first started writing press releases and news stories. One day, the director of the organization asked me if I wanted to do specialized journalism training, recommending me the School of Advanced Journalism. I thought there was no point in any courses for me, especially since I was already employed. Everything changed after I took part in a Summer School for Young Leaders.

For five days, together with other young people from different regions of our country, we learned to develop our leadership skills. We were taught project management, political marketing, public relations, PR, and many other things, interesting and very useful for young people... And at that training I realized that I needed more knowledge in the field and new challenges. The School of Advanced Journalism proved to be an ideal place for this, because it is a very good platform for those who want to change their specialization and master a new profession, or for those who want to improve their writing and communication skills. I prepared my documents, and in September 2015 I was already a student of the School of Advanced Journalism.”

The School of Advanced Journalism gives equal opportunities to everyone

„Are you out of your mind? How will you study in Romanian?!” – such was the reaction of my friends, colleagues, and relatives when they found out that I had filed my documents to the SAJ. Frankly, I was not sure that I would be able to cope with this task, especially since I did not speak Romanian at all. Fear and mistrust disappeared as soon as classes began. I am very grateful to the trainers of the School of Advanced Journalism, who always explained to me when I did not quite understand the terminology or what was being discussed in the class. I also thank my colleagues, who answered all my questions, sometimes banal and odd...”

„Comfort, kindness, and warmth – such was the atmosphere that permeated the SAJ. In the ten months of study, the School became our second home. I still remember staying up until midnight to prepare materials for the courses on radio or television journalism. It was the best time, when we, young and restless, were making our first steps in the profession of journalist. At the same time, I must admit that, as it often happens, only when I started working I realized how much I had learned at the SAJ and how good those courses were.

I’m glad that in a relatively short time, in just ten months, I got the knowledge that I wouldn’t have managed to get even in four years at university. Today, in the era of information technologies, a journalist should be able to do everything: write news, shoot and edit reports for radio or television, lay out a newspaper page, shoot high-quality photos, create infographics, and know how to promote articles in social media. The School of Advanced Journalism teaches all these things.”

After graduation, I decided to return to Comrat

„I decided to return home, because I wanted to be useful in the place where I was born. I want to help change and, perhaps, improve the quality of the media in Gagauzia. I am lucky to work in the same editorial office with professionals. The www.gagauzmedia.md news portal is an ideal platform for my professional development. The most important thing is that I can write about anything I want and nobody gives me indications, which is vital for a young journalist.

Last autumn I started to cooperate with the team of RISE Moldova. I participated in two journalistic investigations and I hope to continue. I always thought that this genre, journalistic investigation, was the most difficult. So I am very proud to have worked with a team of professionals, and I am grateful to the guys from RISE for their patience, support, and useful advice.

Thus, in a relatively short time – two years since graduation from the university – I can say that my life has changed radically. I gave up daily monotony and boredom in favor of constant emotions. Journalism does not tolerate laziness and fear; instead, it makes you live in a world of events and adrenaline.”