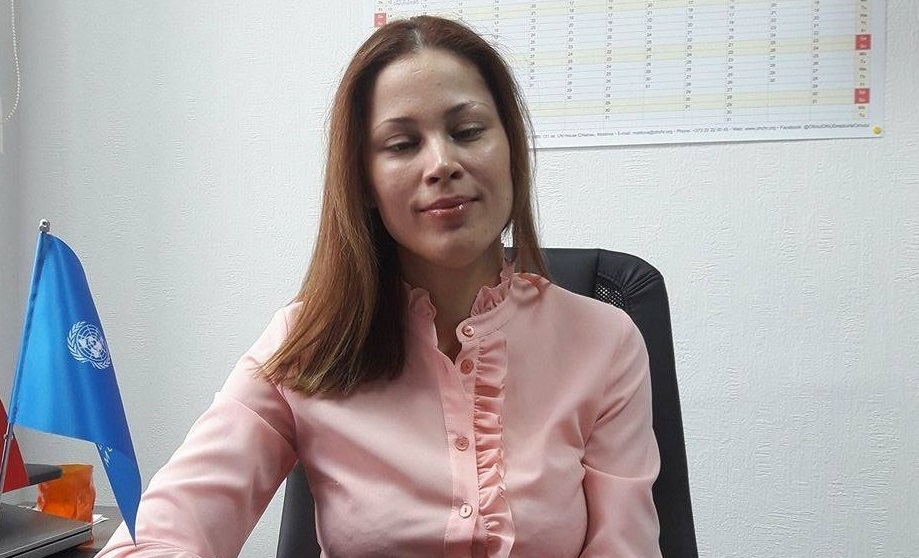 ”The School of Advanced Journalism Offers Equal Opportunities for All”

She enjoys music and sport, and since childhood she dreamed of becoming a journalist, so, just four years old, she would improvise TV interviews and reports in front of a mirror… But the road to her dream was rather long. Thus, before she came to the School of Advanced Journalism, she got two graduate degrees (in foreign languages at the “Ion Creanga” State Pedagogical University, and in economy and management at the Academy of Public Administration), and worked as a translator at the Association of the Blind of Moldova. However, her thought of journalism kept following her. We are talking about Xenia Siminciuc, graduate of 2008-2009 class, communications officer at the Office of the UN High Commissioner for Human Rights.

“I always knew that a reporter’s work was very hard – either on the radio, in print media or on television. Still I always saw myself as part of this interesting and captivating process. I wanted to see how things are done behind a newspaper page, radio waves of TV screen. My dream started taking shape when I found out that the SAJ announced admission for a new school year. I was excited, although the thought that I was visually challenged lessened my hopes of admission… When the admission campaign was nearly over, I had a very serious discussion with my husband, and together we decided that I should at least try. So said, so done!”

I tried hard to deal with challenges

“I still remember my admission interview. It was quite difficult, especially that I didn’t know how the commission members would react when they saw me… After a round of questions and answers, they asked the one question I feared the most: ‘How will you manage?’ ‘I will do everything I can to manage,’ I said. And so, in September 2008 I became one of the 17 students admitted to the SAJ. I was really happy, and my self-confidence grew thousands of times! In the year that followed, everything was possible due to the fact that I was offered the chance to learn at one of the best journalism schools in the country. If they believed in me, why wouldn’t I do it?!”

The School changed my views and steeled me

“I realized that admission was just a first step and that it wouldn’t be easy, especially since I didn’t speak Romanian very well. I asked colleagues and trainers for help, and, with much work, I managed to learn the language. And I am proud of myself today! Another challenge was the special equipment, since they do a lot of practical exercises at the SAJ, and we, the students, had to act like real reporters. When I would run about the city in search of news and reports, photo and video cameras and voice recorders gave me lots of trouble.

“But I tried not to complain of how difficult it was. I always had the help of colleagues and encouragement of trainers, and I am thankful for that. In the ten months of study I was treated fairly and equally, without discrimination or favoring. Like everybody else, I did works for radio, print media or television, and I met the deadlines, which is very important for a journalist…”

Journalism started living in me

“The experience and knowledge that I got at the SAJ helped me later to produce an investigation that shattered the rotten health care system in our country. It is a study published in March 2015 by the UN Office for Human Rights about the situation of children with congenital malformations in Moldova and how corruption in hospitals is killing them. I would like our journalists to cover sensitive social topics as often and as much as possible. I believe that it is the only way we could change things.”

At the SAJ I met people who change Moldova

“In the nearly eight years since graduation, I worked mostly in print media. Since 2014, I have been a communications officer at the Office of the UN High Commissioner for Human Rights, and although I don’t do classical journalism, I keep in touch with all my colleagues and with many other SAJ graduates. We are a very big family! We are trying to collaborate with various institutions and organizations to promote human rights. Who knows, maybe we will even start a course for the students of the School of Advanced Journalism!

“I am extremely happy that the School of Advanced Journalism happened to be in my life. There, I met people who change Moldova. There, I learned to be strong and not to give up to challenges. Because the School offers equal opportunities for all.”